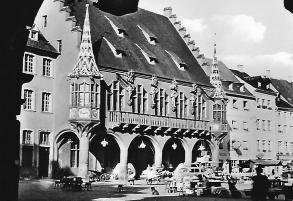 Welcome to Freiburg 1914. The picture on the left is of the historic market in this historic city.  It was in the area of this city, in the house of the Baron & Baroness von Gleichenstein, that my mom (Theresia – Rosel) managed to receive employment, learn to cook and to help support the family back in Muggensturm. As a child, I heard mom mention these Von Gleichenstein names many times in conversation while in the company of friends from the old country. I never realized the significance of all this till I started to put the pieces together for this chapter. I found out that the (link->) Von Gleichenstein family still exists. I will make an effort to contact them soon.

So!, just how did Rosel manage to come into this great opportunity. There is something to be said for just plain luck but all the pieces fell together with this one picture. In the picture is Mom in a horse carriage with her good friend from Muggensturm, Freida!

On back of the picture in my mother’s hand is written “1916 with Freida Beetz”. Just by their clothes and the situation, they are both in Freiburg together working in some roles as ‘domestics’ for the family there. Freida was a part of our lives till she passed away in New York well into the 1960’s. Freida was maid of honor at Mom and Pop’s wedding in NY. She was one of four sisters, Erna, Irma, Paula and herself. I had met each of them as Freida sponsored Erna and Irma to America. Paula for whatever reason wound up in Brazil but visited NY a few times. Thus, Tante (aunt) Freida

and Tante Erna were a parts of our lives and even attended our (Hugh & Lynn’s) wedding. Freida never married but Erna was married to Onkel (uncle) Ernst, both of whom became parts of our lives well into the 1970’s.  So in my mind, this and some other of the family puzzles are solved by the Freida link. No doubt, as a friend from Muggensturm, she coaxed mom to follow her along her road to America. More to come on all of this as we progress. These two ‘mug shots’ from 1915 must have been some sort of employee ID I am guessing. There were more along with these, but no one I recognized

Here are some interesting facts which are hard to exactly piece together in time.

Everyone immigrating in those days needed a sponsor who committed financial assistance and employment and the participants all worked together to figure the details out. Tante Freida, was the leader of the pack for sure. I wish I had hugged and kissed her more often in her later years now that I realize her significance to my parents .

So, we follow this incredible 11 year period with pictures taken during that time. Much happened in lots of the places that we have covered so far. These photos only capture parts of the dynamics of international coordination, maturing in life, growth of family at home and the eventual goodbye’s into the unknown with perhaps without the ability ever to come back. As you look at the pictures, if you click on one it will enlarge and using the arrows you can go through them.

How about Pop as the chauffeur. He had to be schooled as a mechanic, capable of managing the automobile fleet. I know him while I was growing up as the man who could do, make, fix, anything in addition to being a ‘master gardener’. More on all that later.

In the meantime, some more pictures of my mother as she matured in an environment so different from her first 14 years. Her trips home were frequent as were Pop’s. Her families back home also grew, married during those early years, went off to WW1 and carried on with the lives they knew and treasured. Here are some who went to war, mom’s brother Franz Joseph, named for his great grandfather, did not come back. Herman Lutz served in the Navy and returned to run the barrel business (chapter 2), Otto also, in the barrel business raised a great family of my first cousins, Maria, Anna, Karl & Rosel (more later). At this writing cousin Rosel is still with us. The mug you see is my personal remembrance of all this. It belonged to Mom’s brother in law, Simon Reiger. It is called a ‘mustering out’ mug. One of each of these was given to each soldier as the unit they were in broke up after WW1. On it is his name but also around back are the names of all in his company. This mug was given by Simon Reiger to my Mom during their 1966 trip back home. Be sure to click on photo to enlarge it. 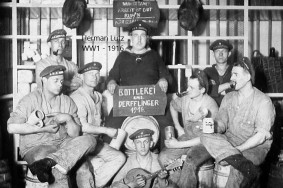 Pop took advantage of doing the things he loved best as time permitted. His job as chauffeur took him to many places and gave him appreciation of a life style he would bring to America. Many post cards exist that were sent to Mom and family on these trips. One is on display here. 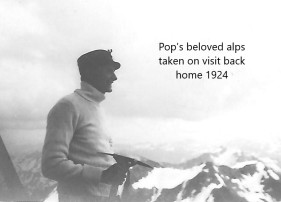 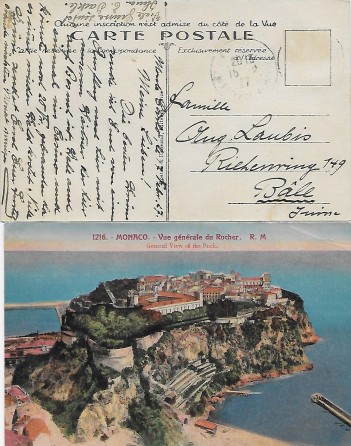 As her trip to America came closer and closer, Mom took some final trips to visit family and say her farewell. With most of her immediate family gone except for her brother Otto and her sister Johanna, now living married in a neighboring town of Michelbach, she made her rounds of the Lutz’s in Muggensturm, visited Pop’s family in Basel, and a final good-by to Simon, Johanna  and their family. In 1966, we visited and saw the magnificent historic house they lived and wonderfully met the entire family. Johanna passed in 1968. Mom’s Uncle Valentin Lutz accompanied her to the train which would carry her north to Bremen where she would board the ship that changed all our lives. We were so blessed to spend the two weeks with Mom and Pop visiting all the relatives. Here are some of Mom’s ‘last visit’ photos. 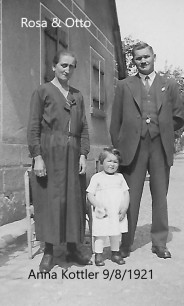 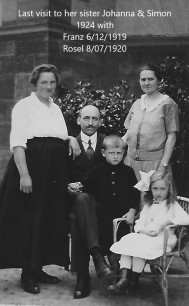 Finally, next are pictures of Mom’s ‘Ausweis’ from Germany. The official document that gives Mom permission to leave the country….. on a one way trip to America. Mom in all her years threw away nothing of historical significance related to our heritage, so here is also the picture clipped from her passport. What a beauty she was! 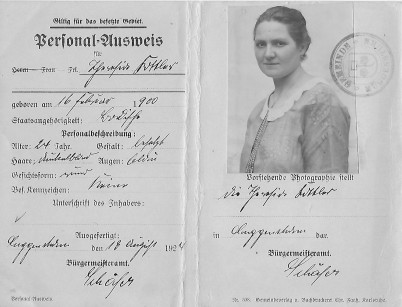 While living in America, as many had, mom had a favorite radio and later on TV show which she loved to watch. Therefore I got to follow the star of the show also.

Her name was (link=>) Kate Smith. Please have a listen.