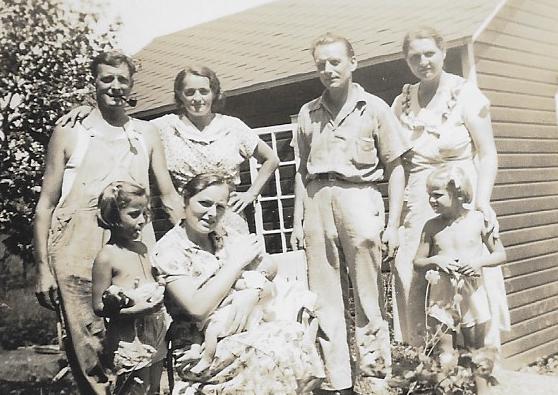 That title is so true because it was in Tanta Erika’s genes and she just needed to work the soil and raise her children out in the country. You will see she had plenty of company in all us country cousins. The lead-in picture which shows my country ‘cousins’ typifies their rural experiences during the 1930’s. The Zittel’s, Wyrenbeck’s and my mom and pop raised all of us kids together on the country-side even though it was just started as ‘weekend’ relief from the city apartments. 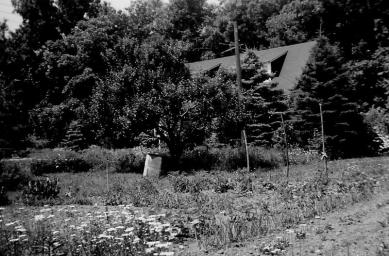 These three Muggensturm families came together often. Karl and Anna Zittel lived in Brooklyn. Their story is here The Zittel Family Please read it and enjoy. Mom and Pop were in the Bronx and went to the country-side often. Erika and Albert lived in the Bronx before finding their mini farm property on Moseman Avenue in Somers, NY. The Muggensturmer’s were Karl Zittel, Erika (Gnahm) Wyrenbeck and Theresa (Kottler) Laubis. Pop was from Switzerland and I am not sure where Anna and Albert came from. No matter, the point is the three ladies raised all of us but also always had vegetable gardens till they passed. Digging dirt and putting wholesome food on the table was in their blood.

So, Albert and Erika were wed in about 1930 and soon after started a plan to move out of the city. Albert was a waiter and made a living working in fine restaurants in Manhattan. In Approximately 1932 they venture into Somers and buy a property on Moseman Ave which had about 8 families on it, mostly Germans, big plots with Danko’s and Sutton’s farms there also. They cleared the property and over time, with the help of my Pop and Karl, the slow progress with multiple additions provided the final product about 1937. About that time they were permanent residents of Somers NY.

Part of the magic that held us all together were us children. That is what made us all kind of cousins who grew up together calling each other just that. 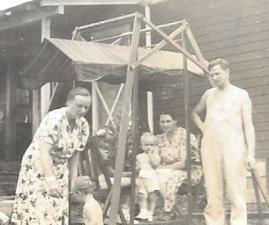 The real story for the rest of this chapter is my memories of the wonderful times spent by Volker and I growing up and the real life experiences two boys growing to be men had together. He has passed sometime around 2005 but will never be forgotten. Young Albert always tagged along in the early days and at times Volker and I wished we could leave him home. However, as time went by, Albert became one of us, a good friend and a responsible son to Albert and Erika in their later years. By the time the ’40’s came along, Mom and Pop had their own Lincolndale property started. The routine became that on the way up from the Bronx, we would stop at the Wyrenbeck’s and then they either dropped me off for the weekend or they came along with us for the weekend.  Here are some pictures of those early days. 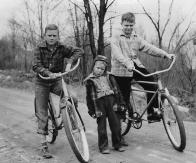 During those early years we continued to live in the city as Pop’s job working for Metropolitan Life in Stuyvesant Town was where we grew up and lived our lives. Our story during the 40’s – 50’s can be seen in Chapter 6. The important point though is that as we grew up, Volker, the Wyrenbeck’s and the Zittel’s also came to see us there. Here are some photos of those times. We also have a YouTube video of Christmas at our home in Stuyvesant Town. Here is the link so you can watch it. Christmas 1952 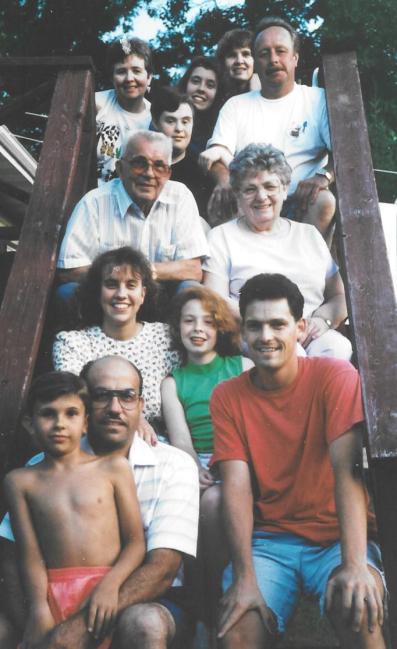 Life for all of us changed in the 1950’s as new family events happened to each family. The Wyrenbeck’s added new family into their lives. Erika all this time still had family back in Germany. Her mother, ‘Frau’ (Mrs.) Gnehm lived to a ripe old age. She also had 2 sisters, Paula & Anneliese. Both had families. Paula stayed in Germany. On the other hand, Anneliese along with her husband Oswald and their two kids Inge and Sabina immigrated to America. Here are some pictures. Inge married Bill and had a son ‘Billy’. Sabine married Joe.  As a family, they became part of the whole scene and set up a nice home not far from all of us. Oswald was a stone mason and made a great living in his own business. They all integrated into our family lives as time went on. Here is another YouTube video taken when we were all together for a thanksgiving dinner at the Wyrenbeck home. Thanksgiving 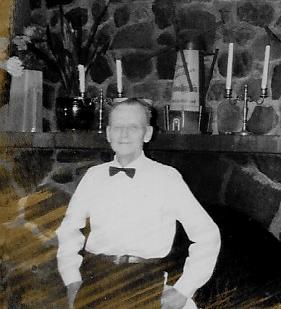 Also, in the late ‘40’s early ‘50’s, Albert and Erika started their own business opening a restaurant in nearby Yorktown Heights call ‘Terrace Restaurant’. The whole family lived back and forth between house and business about 5 miles apart. This caused Volker to go to Yorktown Schools which is where he undoubtedly first met your mother Judy. The business did not last but a couple of years and they moved back home, and Volker & Albert went back to Somers schools and he graduated high school from there. ‘Old’ Albert went back to work as a waiter at a restaurant called ‘Travelers Rest’ on Rt. 100 not far from Somers. He became part of ‘family’ there and continued on there till he stopped working. 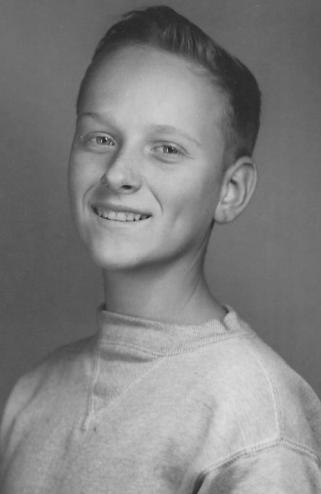 The 1950’s brought Volker and I into the world of cars which gave us as drivers the capability to go out and explore the world around us. We did lots of ‘teen’ stuff together. One of our first overnight ventures was to take his family car on a visit to the Catskills to visit family friends, Jacob & Rosa Rastatter’s in Rosendale and the Zittel/Tompkins family in Greenville. This was a huge event for each of us. Here are a few pictures with then already Grandma Anna and her new ‘Tompkins’ grandkids Rudy & Debbie taken on that trip. Here is a another short YouTube video showing us and our cars. Our Cars!

We did lots of things together into our adulthood. Fishing was one of them. 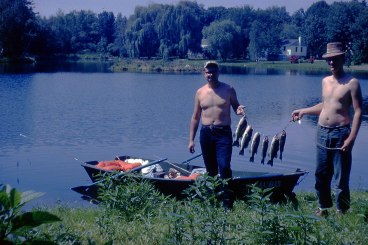 Next big event was Volker going off to the service. I had the pleasure to drive him to the Peekskill RR station and wish him well on his journey to Basic training.

As time went on, we all got married, had kids and our lives moved on in separate directions. The first big event was Volker and Judy getting married and starting a family.  Me being single, living and working in the big city and he in his Electrical Business with a family, we naturally separated some. I helped Volker build his house (also Lincolndale) spending many weekends with a hammer in my hand. He and Judy with all the children lived there for a time.  Lynn and I married in 1962.

At some point, after the Balodis family got settled here in America, Erika’s mother came to visit in the USA from Muggensturm. I always just knew her as Frau Gnehm which is proper German to a lady. She lived on to a nice old age. Anneliese and Erika as well as my Mom and Pop in 1966 visited her in Muggensturm. Here are a few pictures through time showing her while here.

My mom with 3 sisters

Now into the ‘60s a couple of things happen. Volker got disenchanted with the taxes in NY and decides to take his family to New Hampshire, leaving behind Erika, and the two Alberts. Lynn and I were busy living in the city so the physical divide as cousins drifted but the emotional attachment was always there. Volker on his occasional trips down always stopped by to see us and my parents. I loved him for that as they were parents to him as well. Here is a one minute YouTube video on one of those visits. Volker Visit

Somewhere along in that late ‘60’s early 70’s timeframe, Young Albert and Karen become family and they live with Erika and Albert on Moseman Ave. Timing was right because Uncle Albert comes down with dementia and Karen becomes a great asset to ‘Oma’ Erika in helping to manage him through his demise. It was a sad time and a strain on all. Albert, Karen and kids always remained good friends to us and Lynn and I visited back and forth often. 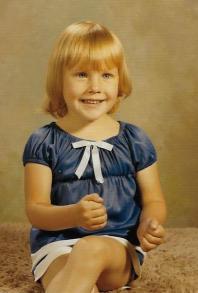 Today, Volker and Judy’s family lives in New Hampshire. We are still in touch primarily with their youngest ‘Tina’. Volker and Albert, my “cousins”, have passed on but our memories of them and the entire Wyrenbeck family will live on for future generations to appreciate. At this link you will find a file I put together for Volker’s family after he passed away. Much of it is a duplication of what you have already read here but I present it to you so you know how close he and I were together. Link==> Volker

Here are some more pictures of them for your enjoyment..

And one final salute as I remember them best. God bless them! 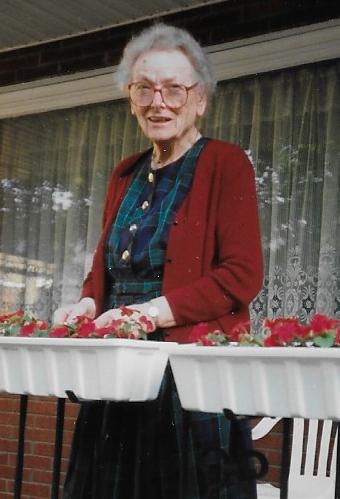 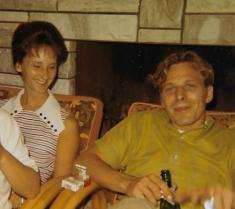 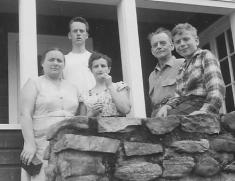 Pick where to go next!

The Zittel’s and Tompkins Family

Chapter 1 – The tribute to Rosel & Gus