Bob becomes an Octogenarian! Have a look at this story!

I would like to introduce one of our family and friends, Bob Shea. Bob and I got to know each other when, in the third grade, our family moved to Stuyvesant town on East 14th Street in Manhattan. Bob and I remain great friends although our jobs took us to separate sections of the country after our marriages. We spent many a day in each other’s apartments, on trips together, just everywhere. Of all my boyhood friends, Bob knew my parents best of all. Here are his some of his comments. We look for more in the future.

When my mother, two younger brothers and I moved from Brooklyn to Manhattan in 1947, I was enrolled at the Immaculate Conception grammar school. I met Hughie in the third grade. At that time the area north of 14th Street between First Avenue and Avenue C was newly redeveloped housing called Stuyvesant Town. Consequently, Immaculate had small classes so Hughie and I were in the same class from 3rd to 8th grade.

Outside of school I can’t say that I remember too much of Hughie during grammar school. I know we both got up early in the mornings, he more so than I. Hughie had a paper route and I was an altar server at Immaculate and also at my parish of St. Emeric. It was about a ten block walk in the morning to serve the 7 am Mass at the Immaculate.

Even though we lived about six blocks apart, those six blocks around 14th Street and 1st Avenue in New York City consisted of many different ethnic and economic life styles. This diversity was reflected in the groupings in the grammar school but seemed to melt somewhat by high school.

It wasn’t until high school that we began to socialize. Even though we went to different high schools in different parts of the city, it was the Immaculate that again brought us together. More specifically, it was the Friday night dances at Immaculate where all the former grammar school kids palled around. Also, that was where all the girls were. Following the dances everyone went for pizza. Hughie and I went home the same way so we always talked and became friends. We would visit each other’s houses, but because I lived the furthest away, it seemed that that I was Hughie’s house more often.
Hughie’s mom was a warm and loving woman who treated me like a second son. His mom would always ask me what I wanted for a snack. She would get flustered when Hughie would kiddingly say that he should get to choose as he was her son and not me. Best of all was Mrs. Laubis’ sauerbraten, noodles and homemade apple sauce. To this day, sauerbraten is my favorite food. Left over sauerbraten gravy on noodles goes with anything and is a comfort food to me. I also can’t forget the buttered rye bread. As a part of the family, I still recall riding with the Laubis family and visiting relatives in Baltimore and Massachusetts.

We both worked during high school and my free time was mostly spent away from the area where I lived and in the play grounds of Stuyvesant Town. Like a lot of city kids, we played basketball and socialized with the kids in the area. After high school I attended Hunter College at their Bronx campus and Hughie attended a technical institute. While we both always worked while in school, we did manage to get together on the weekends. I remember shooting pool at various locations in the area together and with other former grammar school friends.

This period is also when we would get an occasional weekend off and go up to Lake Lincolndale, NY for relaxation and hunting. Hughie’s dad was building a house and on occasions I would be invited to spend the weekend. I still remember there was no front door, entering through the basement and climbing the inside stairs to the first floor.
I remember skeet shooting one weekend. Hughie bragged that he could throw a skeet, pick up his shotgun and hit the skeet. He did!! I didn’t even try. 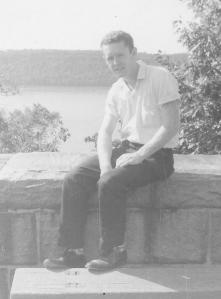 When Bob & I visited Cloisters 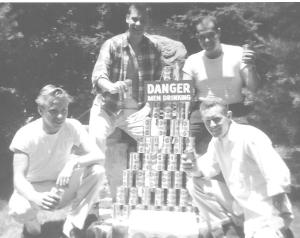 Hughie gave me my first driving lesson. I just saw the video LINK==>of Lynn’s driving lesson and noticed that his dad was in the car with Lynn. I remember Hughie saying that I burned ten years off his clutch.  I did finally learn to drive a stick shift while in the Army.

Remember when one night we all “found” the female manikin in Greenwich Village and took it home in a cab. You put it in your bed under the sheets. You mother saw it the next morning and almost fainted. You were always the dutiful son. 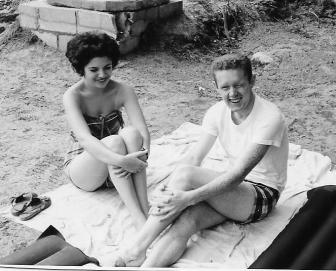 Seeing another video of LINK ==>  Hughie and Lynn, Mattia and myself, and Paul Jensen  in Lincolndale, when we were all single in 1960, recalled a beautiful time in our lives and remains in our hearts.

Thank you, Hughie, for sharing the videos, but most of all, thank you for sharing yourself and wonderful parents with me.
Bob

Here is Buddy Bob in Lincolndale playing cards with Mom & Pop and my Lynn!

Also here is a short video link to some 8mm movies taken at my parents house. Bob was a visitor with us often. If you watch a couple of minutes into it you will find Bob and I horsing around before dinner at my moms one Sunday back around 1958 or so.

Sunday dinner at our house

Thank you Bob, for all the beautiful memories, you were my best buddy growing up! Love Hubert (Hughie).

I loved Chapter 4, <=== LINK especially the picture of your mom and the dog at the end.

I remember going to Baltimore with you. I never forgot about the women cleaning the marble steps outside the houses. I mentioned that to my wife, Mattia, this summer, when we were walking around the neighborhoods in south Philadelphia and I saw that a few homes had marble steps.

I also remember visiting a family restaurant in New England with your family, must have been your Uncle Ginny’s. I recall that I praised the home made pot roast we were served. Embarrassingly, I was told it was sauerbraten. It sure didn’t taste as good as your mom’s. Her’s was the best ever.

I recall also going to the roller derby at the armory on 14th street and watching the ladies fighting for the lead. I remember going with my brother, Kenny. Did we go together? (YES, Bob we sure did!)

I also remembered that you had a job at a yeast factory in New Jersey. I see that job came from your uncle Bast at the plant.

This chapter really helped me work on my memories. I enjoyed all the LINKS ===> too! More to come. Merry Christmas!

I recently received more information of Historical value from Bob.  It is a great piece as a document  Commemorating our 1953 Graduation  from Immaculate Conception Grammar School on 14th Street near First Ave. opposite Stuyvesant Town. The picture of the cover is shown here. You can browse through the entire document which is about all of us graduates, inside a PDF File by clicking on this Link  ===> ICS . More about us below the picture. 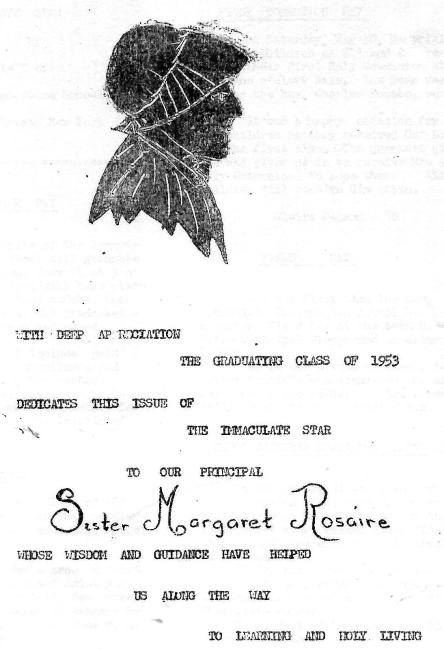 The 1953 Graduating Class… Their complete names and a little history of each is inside the document.

Personally, my buddy Bob is the only one of the class with whom I still have contact with. When I worked in Manhattan (1960 – 1966) and roamed midtown, I did bump into Richie Gazda at one point. In more recent times, 200? my good friend from high school Gene Gallagher, wound up playing golf with Danny Donovan and so he and I were in touch at that point. See in this film clip of ‘car stuff’ buddy Bob and I at sometime in the 1950’s out to Long Island for a visit with Richie Gazda.  Bob & Richie Gazda later in Car Stuff video. <===Link

Now in 2003, while living in Virginia, Lynn and I headed north to Philadelphia and met up with Bob and Mattia Shea. Together we went on to Immaculate Conception for a Reunion event. From our ’50th Anniversary Class there was just five of us guys, Besides Bob and I, there was Carl Vella, Tommy Bruno and Julius Kaminisky. The interesting point I remember was Julius telling us that he still lived in the same rent controlled apartment that he grew up in during the ICS days.

I thank Bob for sending the document along to me as it gave me the opportunity to share the graduation picture plus all these candid shots from our youth. Some great shots here. Wish I knew where all these people are today. God bless them all!

At a later time… Pete McNulty who moved away comes back to visit. Hugh & Paul Jensen greet him

And then a few pictures from Hugh’s Surprise Birthday party, guessing it was 8th grade. My sister Elizabeth played Chaperone. Looks like I had a great time! Put cursor on each picture for the caption. 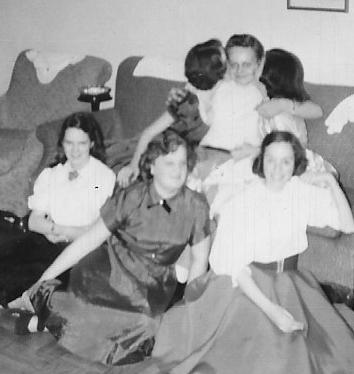 Hugh with his classmates

Thanks so much Bob, great stuff and I am glad it is all here thanks to you. Now Bob, you owe us a little of your current life whenever you get around to it. Folks, here is a picture I captured of Bob taken off a YouTube video. Bob volunteers at the Firemen’s museum in Philadelphia.

Third from left is Buddy Bob Shea! He is active in the Fireman’s Hall Museum

Well, Well time really does fly. It is 4/22/2020 and the world is on a Chinese Virus Pandemic. So lots of us are catching up on things that needed doing but now that we are homebound, are getting done! Bob and Matia while getting ready to downsize, came up with this April 14, 1964 picture of their wedding.

He adds these comments in the email he just sent with the picture.

Hi Hughie,
Attached is the wedding picture we spoke about.
What I remember of the actual wedding is pretty limited.  I remember putting on the tux at home, not sure how I got the church; the priest was late for the ceremony; people throwing rice.  The reception was a blur, much too busy going around talking to well wishers.  I do recall thinking how great it was to have both families and dear friends at the reception.  I guess I had fun.
I remember going to Manhattan’s Waldorf Astoria on Park Avenue, we had a suite.  Had dinner at a French restaurant with strawberries in wine for desert, which is still a favorite of ours.  We went to Sunday Mass at Saint Patrick’s Cathedral.
Fifty years later our kids gave us a two days stay at the Waldorf Astoria to celebrate our fiftieth anniversary; it was not a suite.  We went to a French restaurant for dinner and  were told by a New York City cop that we were the nicest looking couple on Times Square.  We even went back to Saint Patrick’s for Mass and renewed our marriage vows.
Mattia told me to say that each year on our anniversary I remember to say that I married the love of my life.
Stay safe and lots of love,

OR one of these!

Robert Kaylor aka ‘Kaylor’ and RKHubert – Growing up!